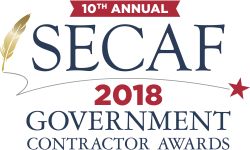 The SECAF Annual Government Contractor Awards honors small and emerging government contractors and players in the industry that rely on small business.

Award winners will be selected from a group of finalists in six categories as follows:

Nominations for the 2018 awards are due by Friday, March 2nd.  Click here to learn more about the SECAF Government Contractor Awards and the nomination process.